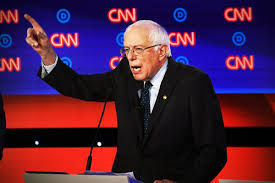 Bernie Sanders' strategy for the White House is simple. Sell fantasy. He is expanding this from free college and free healthcare to a free $16T climate change plan.

Why is $16,000,000,000,000 free? Because Bernie doesn't really know how he would pay for it and just continues his soak the rich mantra and pretends that somehow (magic?) a plan like this would be break-even.

Often praised for political bravery, this plan shows how cowardly Bernie really is. He knows people won't support his hairbrained schemes when they know they have to pay (enormously) for it. Not only that, he refuses to side with climate scientists and support nuclear, which many believe would be required to truly transition to carbon neutral electricity. Read more here on Fox News

Why it Wouldn't Fix Climate Change

Put aside the obvious argument, that he would never get this $16T boondoggle through the house and senate (if he got elected). Let's also assume it passes and he somehow comes up with the cash without bankrupting the country (again magic). It still won't solve the climate crisis.

Bernie is hooked on political expediency, keeping his base of mostly young voters excited by his "vision." He knows he is slowly losing to other candidates so he needs this sort of thing to get him attention. But he leaves our critical things that would be needed to get emissions down like he says. In addition to the question of Nuclear power, his reliance on wind and solar is about cheering Millennials not economics or climate. What about carbon capture? Not a word.

This "program" is already laden with pork from cash for clunkers, gutting the Defense budget and free food for people and that's before the other politicians get their turn at the trough.