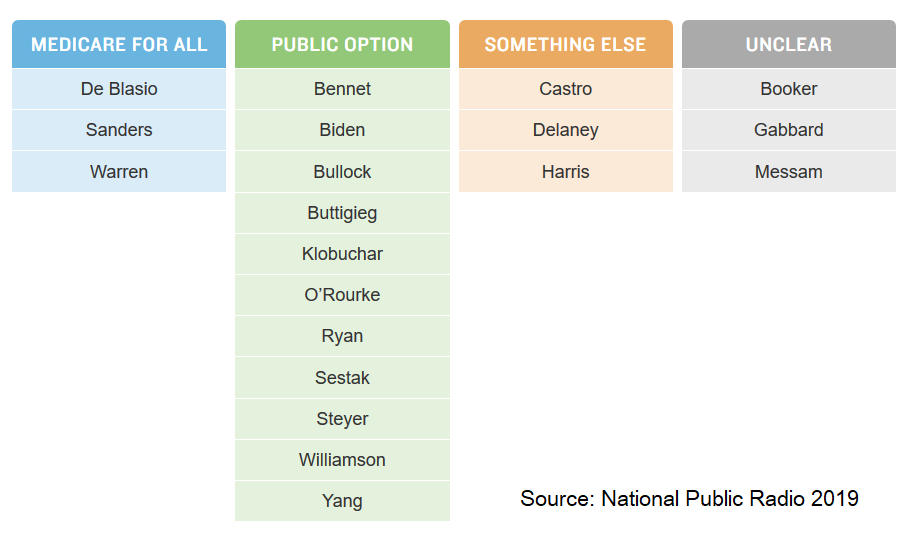 Medicare For All Could Allow Dems To Snatch Failure from the Jaws of Victory.

Healthcare is a gigantic mess. The only workable solutions barely get any attention from presidential candidates. People are fed up and we are running out of ways to keep this leaky ship afloat. It costs too much and there are massive gaps in care.

But the rise of the Nuevo-Socialists in the Democratic Party has done something surprising. It has put real power behind the idea of nationalizing health insurance. This has a lot of young people (and many ex-hippy Boomers) fired up. But it means that they are attacking every day the direction the party was actually heading, the so-called Public Option.

The rise and fall of the Public Option

On few other issues have the Democrats moved positions so dramatically in the last few years. Not long ago there was good support in The Party for Public Option, wherein the US government creates a health insurance company and offers it to everyone as an alternative to private health insurance. This has its pros and some very big cons. It was envisioned ahead of what led to the Affordable Care Act (aka Obamacare) which expanded Medicare and Medicaid and pushed some new costs onto private insurers.

Obamacare was a classic compromise in that it landed us in a place nobody on any side wanted to land and basically accomplished little good. Go ahead and comment about the people who didn’t have coverage that did. Those people had their healthcare subsidized one way and then got it subsidized a different way. That’s no revolution.

Medicare For All is a relatively new way to package a single pay, government takeover of health insurance. M4A is advocated by people who trust and respect the way the federal bureaucracy functions to much that they want it to become an insurance company. Think about that for a moment. What organizations do you trust to be most efficient especially as it relates to the health of your family? Does that include the US government? Because there is serious support for just that.

It would outlaw our system of private health insurance. One can imagine supplemental insurance possibly but then you get two levels of coverage for “the rich” and everyone else but that is a whole other thing.

Public Option still basically does this, but it doesn’t outlaw private health insurance. So, the inevitable outcome is everyone who currently buys health insurance keeps it but also must pay for government healthcare for those who don’t. In the end, it is about paying for your neighbor’s healthcare and having it administered by a gigantic federal bureaucracy with all the graft, greed and crime those attract.

Medicare for All is Impossible

Medicare for all is NEVER going to happen. Studies show it will cost $32 trillion dollars. That is $32,000,000,000,000. We do not have it. Even its staunches supporter, Bernie Sanders, wants conveniently to give himself 10 years of his potential 8-year presidency to implement it.

If by some miracle a bill passed the House, it would be DoA at the US Senate. A change that big upsets too many constituencies and too few people want to see the government grow that big.

So, the Republicans have been arguing to make people more accountable for their healthcare (and health) choices and to curb some special interests…especially the lawyers…oh God the lawyers. With the goals that better market forces and less distortion of personal incentives will improve things.

Meanwhile the Democrats want a massive new federal bureaucracy to increase federal employment and feed the legal profession. They envisioned this through a Public Option.

What the war on Public Option Has Wrought

By attacking Public Option, the Democrats have caused two problems. One it is going to hurt electability. Even if we don’t get a Medicare For All president, the center has become shaky ground for Democrats on this topic. Joe Biden, the most likely of the three candidates to win the nomination (despite himself) is a Public Option supporter. But the independent voters see that his party can’t be trusted not to try to overstep if he wins.

Public Option is taking such a beating that young people are likely to view it as accomplishing nothing. They have a point. Without middle class insured having to join then it just becomes a public welfare program and a massive net drain. A lot of the appeal of M4A is that proponents believe it will allow the federal government to essentially fix prices with doctors, hospitals, medical device and pharmaceutical companies. Which is true and all bad and unintended consequences of price fixing that comes with it.

The healthcare issue has therefore become the top wedge issue in the Democratic party. The chart above whose that while most candidates support a Public Option, the ones getting most of the primary love are not. The infighting is bordering on civil war and that disunity will cause them to fail to unseat Donald Trump.

I have written plenty about healthcare’s systemic problems and who is at fault (basically everyone). The incentives are all messed up, your boss is somehow your insurance broker. Everyone is feeding at the tough from patients that don’t pay their bills, to the AMA who wants to preserve privilege for Doctors, to drug companies and insurance companies to lawyers…oh my God, the lawyers.

And let’s not forget us…The People. We are probably the worst offenders. People expect healthcare to be ‘free’ which means paid by anyone but ourselves. Consider this. You have health insurance, homeowner’s insurance and car insurance. You don’t file a health insurance claim every time you have your septic pumped, clear your gutters, change the filters on your AC or need an oil change. But you have probably involved the healthcare insurance and billing bureaucracy on every interaction with the healthcare industry does. Add to that the people that simply won’t pay anything for their own coverage or care and the people abusing their health and passing along the costs and you have a mess.

Unseating any sitting president is tough. Democrats continuously fail to understand the appeal of Donald Trump. They see him as erratic, radical, incompetent and deeply unlikable.

Meanwhile the rise of radical politics in the Democratic party and the personal attacks that have come with it are allowing Dems to paint each other with those same brushes.

An issue that could have gotten the Democrats support in the General election has become an Albatross hanging around it's collective neck. While they won't admit it, the winners in this have been the status quo and Donald Trump.