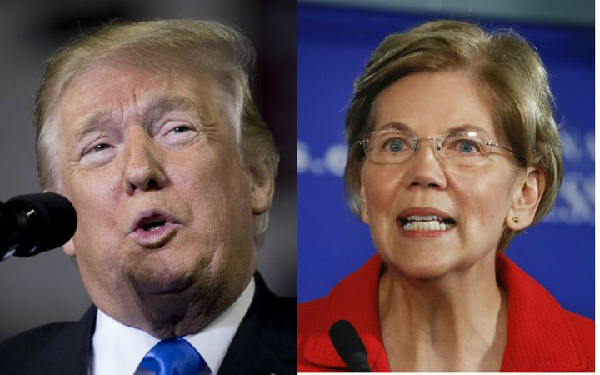 By betting on Joe Biden, the establishment Democrats have laid the groundwork for Elizabeth Warren to win the Democratic nomination and then hand a crushing victory to Donald Trump. The big question is what will happen to the Democratic party then.

Elizabeth Warren’s only remaining competition are Joe Biden and Bernie Sanders and that isn’t good.

Kamala hasn’t been able to generate enthusiasm, Mayor Pete can’t play on a national stage (figuratively or literally), Corey Booker is just interviewing for a role in the nominee’s campaign.

Joe Biden is fatally flawed. He has always been a gaffe prone doofus saying awkward and offensive things while smiling. In the General, people who hate Trump will look past it, but it feeds the other problem which is his mental health is in question. This is different than criticisms of Trump having a personality disorder. You can write that off as boorishness or whatever. But increasingly Biden looks like he doesn’t have the health or stamina for a prolonged fight, let alone 4 to 8 years as the Leader of the Free World. When you are making Bernie look youthful you know you have problems.

Fundamentally, Elizabeth is Bernie but more likable, calmer, more detail oriented and focused, younger and female. Bernie has an excited base behind him, but he also suffers from the ‘too white, too old’ criticism of Biden. But the big problem is Bernie is no leader. His New Hampshire campaign is a mess and his most ardent supporters, who have worked for him on a campaign say he is bad to work for. A republican could quash this and move forward but given the sensitivities of the Left this is a bad thing for Bernie.

Born in Oklahoma City, former Republican Elizabeth Warren is going to have surprising big odds against pivoting to the center.

At the Federal level Republicans are just better strategists. As reported in Slate, the Republican’s strategy of focusing on the Electoral College has given them a huge advantage that means Trump could get 5M fewer votes in the General and still win. Knowing they probably could not compete for the densely packed coastal urban centers, Republican’s started decades ago focusing on rural and suburban voters, smaller states and key demographics. As Slate pointed out recently, this means that given the right circumstances, a Democrat can get 5M more votes and still lose.

The other consequence of this has been a dependency in the expensive General elections on fundraising from coastal elites like the entertainment industry, tech and Wall Street. Wall Street does not like progressives like Warren and she also talks about breaking up ‘big tech.’

Fight For The Future of The Democratic Party

I wrote recently about the civil war going on within the Democratic party. Younger progressives are not merely stirring trouble, they have launched an all-out war, as they see it, for control of the party. They are more focused on breaking the Boomer, establishment stranglehold on the Party for the long term. Strategically, this is a long-term focus, just like the Republicans focus on the Electoral College. Which means gaining control of the party is more important than beating Donald Trump, although they won’t admit it.

So as much as he aggravates Democrats, Trump is likely to win reelection with potentially stronger Democrats never really entering the race. Losing once was bad enough for them but psychologically what will a second straight loss to Donald Trump do to the Democratic party.