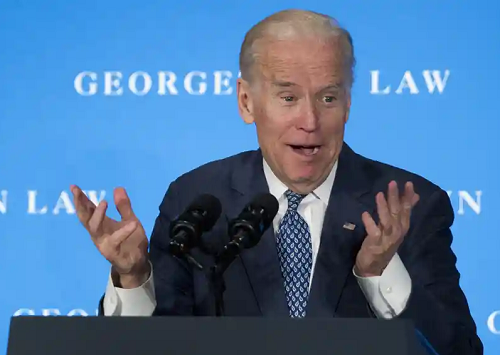 "Uncle Joe" Persona Gets Him a Lot of Free Passes

Quick, what's something that a 20 year old female social justice warrior of color and a 50 year old white evangelical man can agree on.

Whether it is repeatedly racially insensitive comments or inappropriate touching or outright lying about swooping into a war zone like an action star, nothing seems to stick.

"My Word As a Biden"

Politicians have to speak a lot and they make a lot of promises and retell a lot of stories over and over and over. So gaffes happen to all of them. We seem to understand that.

Joe's are different. As you can see below, just the errors can sometimes come multiple times in a single outing. Many appear to reveal underlying prejudices that his own base are highly sensitive of in other public figures.

Why Not Cancel Uncle Joe?

Cancel Culture it the propensity for online mob rule to be ruthless in punishing public figures and hounding them, often for relatively small politically incorrect statements. A whole career can be ruined in a tweet.

It is a fair point to argue that this digital mob may be too quick to grab their internet pitchforks. But if they are so unforgiving of comedians why does Uncle Joe get a pass?

Joe Biden is a ruthlessly ambitious politician. Nobody gets and stays at the top rung of national politics by accident. But he has carefully inoculated himself against serious repercussions by building and leaning into the whole "Uncle Joe" image.

Uncle Joe is positioned a nice, well meaning guy. He is an Uncle you roll your eyes at because he sometimes doesn't know what he is saying but isn't a bad guy underneath it all.

So here is the challenge. If you are going to cancel people for not living up to your standards, can you really tolerate Joe Biden doing the same things because of some obviously phony "aw shucks" moments?

If he means it, then you should hold him to account. If he has no idea what he is saying and can't help but lie and say and do inappropriate things that isn't going to get better as president.

'The bottom line is this. If you tolerated "Uncle Joe" because Obama seemed to like him then the time to admit is that is not enough to want to make him president.

“I love this place. Look, what’s not to like about Vermont in terms of the beauty of it?" said in New Hampshire also 8/24/19

“tragic events in Houston today and also in Michigan the day before.” Biden confusing El Paso and Dayton with Houston and Michigan on 8/4/19